Fallout 76: The Good, The Bad, and The Downright Ugly - By Brayden Duke


Fallout 76: The Good, The Bad, and The Downright Ugly When you think of a Fallout game, you are brought into a wasteland of single player
adventures and simply trying to survive amongst the super mutants, feral ghouls,
and raiders of varying gangs. Strewnamongst the wasteland are the leftover protectrons
and Mr. Gutsy’s of a time long past, and the last sight you would expect to see is a
human controlled player awkwardly running up to you to either A) Try to kill you,
B) Trade and then still maybe try to kill you, or C) Join a team and take on the
wasteland as a squad. But that’s exactly what Fallout 76 brings to the table in a
multiplayer take on the normally single player franchise, and in a three part series
I will go over The Good aspects of the game, The Bad aspects, and of course, the
Downright Ugly aspects. 
In the first part of this series, I will discuss what I believe Fallout 76 got right
with this installment of the franchise as well as a general overview of the game,
and I truly don’t think Fallout 76 is as bad as the critics say it is. It definitely has
its issues, but the core of the game is solid and the fact that you can go and do
quests and fight everything the wasteland has to offer as a squad with some buddies
is something entirely new for the franchise. The best part of Fallout 76, in my opinion,
is going out with your squad and completing the main and side quests together and
progressing as a team, in addition to taking on other squads in PvP, in which your
perks come into play to be the deciding factor in a victory or loss. If your various
squad members are maxed out in perks as different specializations, such as a
melee build, or a heavy guns build, you will do well in West Virginia.

The perks system has changed in Fallout 76, and now you can either choose to
pick a perk card, or move a S.P.E.C.I.A.L point amongst your attributes. I like this
system since you aren’t stuck with one build for your character throughout your
trek across the wasteland and you can adjust your perks to different combat scenarios.
I personally like a melee build and shotgun build, but with the latest patch
the explosive two shot weapons got their damaged severely nerfed due to the
massive complaints of unfair advantages in PvP combat. I’m not going to lie,
I miss the thrill of watching lower level players flying through the air as my
explosive shotgun rained hellfire down on them, and after I stacked caps from my
kills, I went and enjoyed a hard earned Nuka Dark after the bloodbath. Alas, the
PvP can be fun but the majority of players I’ve encountered are simply doing their
own thing in the wasteland and going through the main story or doing some events. 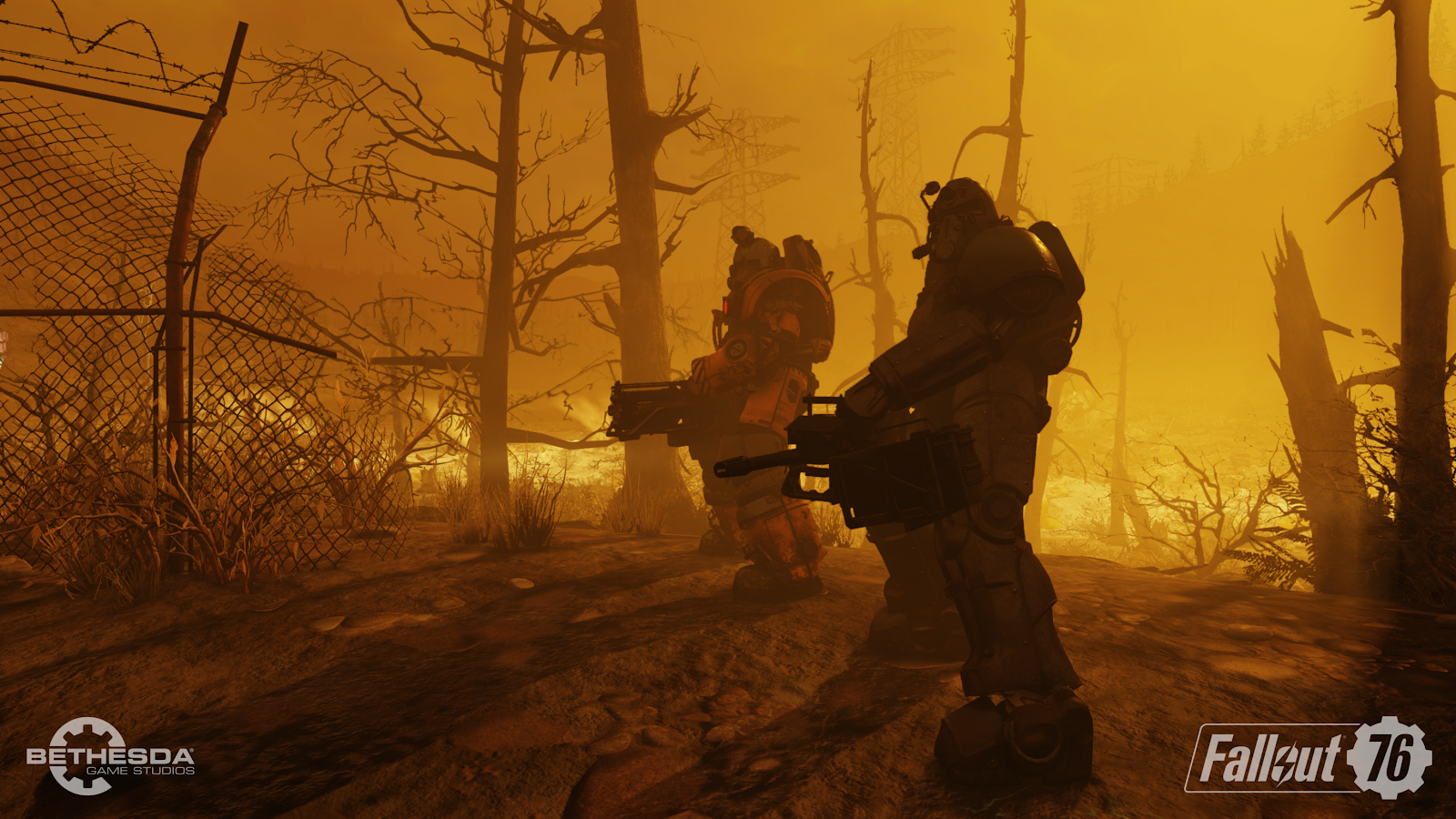 The main quest takes place across West Virginia as you follow in the footsteps
on the Vault 76 Overseer. The map in Fallout 76 spans across 5 regions, which
are The Forest, The Savage Divide, The Mire, The Ash Heap, and The Cranberry
Bog. The entire main quest, as well as side quests, are told through holotapes and
NPC robots so it’s a shift from the regular human NPC’s providing quests
as per the usual deal of the Fallout franchise. It takes some adjusting to, but
what is revealed from the story is an awesome tale of the first survivors out
of the Vault a mere 20 years after the bombs fell, and you will see some familiar
factions as you progress in the story. You’ll see how the Brotherhood of Steel
was formed, as well as get some of their technology and aid them in their search
for more technology across the wasteland. You will also get to work with the Enclave
and ultimately launch a nuke in a location of your choosing on the map, besides
the protected area of Vault 76. In addition to the main quest you’ll have the
opportunity to follow along the Overseer’s journey via holotapes spread amongst
the wasteland, but they are almost always located in areas that you pass through for
the main quest, and are hard to miss with them being Vault-Tec stash boxes. You can
also be initiated into the Order of Mysteries and they act as a sort of vigilante spy
organization, and by doing their quests you can get some sweet weapons and
gear, as well as an achievement. On the topic of achievements for Xbox, or
trophies for PS4, they are fairly easy to get in Fallout 76 and 100% completion
doesn’t take too long.

The enemies you encounter in Fallout 76 are your standard ghouls, super
mutants, and robots, butthere are some awesome new additions such as Scorched.
The Scorched areinfected with a disease of some sort that results in them
being controlled by a hive mind, and some of the first enemies you encounter
in the game will be Scorched. They are similar to feral ghouls, but can mutter
words and use weapons with surprising efficiency and a new creature that is
introduced is the Scorchbeast. A giant bat-like creature that can destroy low
level players without much effort, and you’ll encounter these creatures near
fissure sites , or randomly throughout the world. The ultimate encounter in the game
takes place at the very end if you launch a nuke at Fissure Site Prime, in which
you fight the Scorchbeast Queen and the game recommends using 8+ players, and you
definitely should. What happens when the Scorched Earth event starts can be an awesome
example of the potential of teamwork in Fallout 76. High level players from across
the server can spawn near the the event and all go headstrong into the event to fight
every high level creature in the game, in addition to the Scorchbeast Queen, and
you’ll need all the Rad-X, RadAway, and Stimpacks you can carry to beat this
event. Once you are victorious, you’ll reap rewards of the highest caliber, and
go out into the wasteland with a bunch of cool new gear.

The bobbleheads and magazines make a return in Fallout 76, but unlike
other games in the franchise, the effects aren’t permanent and only last for
a limited amount of time. There are plenty of locations for
bobbleheads and magazines in the world and they will respawn over time,
so keep looking for them in confirmed location or server hop until you find
your desired bobblehead ormagazine. Tales of West Virginia are a cool series
of holotapes that will explain the lore of various cryptids you can encounter
in Fallout 76, and I personally find them to be the most intriguing holotapes
of the whole game. Overall, the story of Fallout 76 is still intriguing, even
without human NPC’s and I can’t wait to see what DLC is released throughout
2019 to continue to expand the West Virginia wasteland and lore. In conclusion, the good aspects of Fallout 76 are the teamwork abilities and
rewards for working as a team, the new creatures to fight, and the expansive
world to explore. I truly look forward to the future DLC and hope you enjoyed
my quick overview of Fallout 76, stay tuned for my next two reviews which
will rip off the blinders and highlight The Bad and Downright Ugly aspects of
Fallout 76 that the global community is in an uproar about.